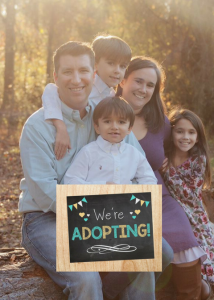 Ben and Chasidy have had adoption on their hearts for many years.  Chasidy was adopted by her dad and Ben is the biological son of parents who served in a Winshape Foster Home.  Ben grew up with multiple foster kids in his home and he learned a lot about children in difficult situations.  When Ben and Chasidy started looking into adoption, they had hoped for a child from Africa but soon realized that African adoptions were becoming very unstable.  Therefore, they felt God leading them to pursue adopting a child from the United States and are open to any race.  Meanwhile, Chasidy continues to be an advocate for orphans in other countries and families that are in the process of raising funds to adopt them.

Ben and Chasidy live in Sharpsburg where Ben is a golf course superintendent and Chasidy works as a nurse practitioner.  They have been blessed with three biological children, Sydney (9), Eli (8), and Liam (5).  They are active members at Southside Church in Newnan. 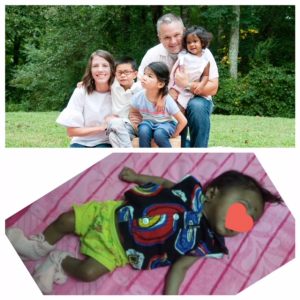 Matt and Kimber had the opportunity to visit India in 2011 and stayed in an orphanage.  They say, “It was the trip of a lifetime to experience a place so exotic, to touch ‘untouchables,’ and to get to know children who have hope and joy in Christ.”  They considered adopting from India after that trip, but God led them to adopt two children from China.  Eventually they did return to India to adopt a little girl, and they are excited to be adopting another child from India into their family.

Matt and Kimber live in Alpharetta with their three children, Teagan (8), Bennett (7), and Ruby (2).  They look forward to returning to India, hopefully this fall, to bring their son, Cannon, home.  Matt works as a software developer and Kimber works part-time with Birds on a Wire, a ministry for moms.  They are active members at North Point Community Church.

*For legal reasons, at this time, we cannot include a picture of the Burgess’ son’s face in India.

Nick and Kate talked about adopting for a while, but it wasn’t until 2017 that they stepped out in obedience to trust God that He would provide what they needed every step of the long journey to adopt.  Initially they thought they would adopt a healthy child, but when their adoption agency sent photos of waiting children with special needs, one particular girl caught Nick’s eye.  She was born without hands and feet, and her mouth was fused shut (she has had one corrective surgery on her mouth).  After they read through her file from the Philippines and learned about her personality and love for Jesus, they decided to pray about pursuing her as their daughter.  Once they received confirmation from the Lord to proceed, they say, “We received a peace from our Heavenly Father that we cannot describe in words, and we can’t wait to hold our daughter in our arms.”

Nick and Kate live in Sharpsburg with their two biological children, Jude (5) and Bethany (2).  Nick works in industrial sales and Kate creates home decor which she sells online. They are active members at Coweta Community Church in Newnan.

*For legal reasons, at this time, we cannot include a picture of the Hayes’ daughter’s face in the Philippines.

The Self Family, Newnan, GA 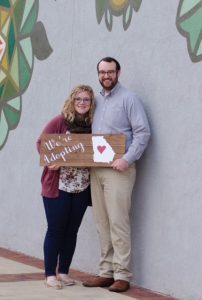 Brian and Alisha have been married since 2009 and realized that they were facing infertility.  They say, “We decided that the route God has placed before us is adoption, and it is a privilege to adopt–an unexpected grace from God.  Even when our plans do not turn out as expected, God’s grace is made manifest in those unexpected moments.”  They are looking forward to being matched with a baby and “seeing God’s grace manifested through our family.”

Brian and Alisha live in Newnan.  Brian serves as the pastor of Sargent Baptist Church, and Alisha works for the City of Newnan.